Get your THANKSGIVING TURKEY pre order in today! 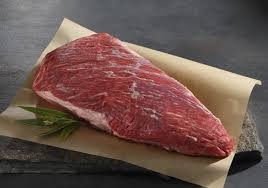 Many people forget that butchery is an art.  The Tri-Tip Roast or Steak is not really a cut that's known very well in the South.  Why? Because our West Coast friends technically "invented" it.  One theory is that a rancher in California was tired of putting this cut into ground beef and cut it out as a steak.  It's also known as a Santa Maria Steak and has become a staple in California BBQ.  Farmer Bryan says that he grew up on it, but couldn't find it out here. Well, now you can! Typical size is 1.5lbs.

This cut works well as a quick-grilling steak or as a slow and low bbq roast. We like it best charred to a nice medium rare, and served with chimichurri sauce.  But we've also bbq'd it up and served it with taters and mac and cheese! Always let this cut rest for at least 10 minutes after cooking, and slice against the grain.

The Tri-Tip has muscle fibers that have an amazing texture when sliced against the grain. The meat comes from the groin of the cattle, an area that stays tender and packed with flavor. On Betsy here, you can refer to the location that says "bottom sirloin".